The story I haven’t shared about beautiful Ethiopia

The “hate” part of my love-hate relationship with Ethiopia began in fervor in August 2016. I was in New Jersey on business from my home location in Houston when I learned that my uncle had lost his seven years’ battle with kidney cancer. I re-routed my trip to Dallas to join my family as my husband Beakal learned he needed to return to Ethiopia on short notice to attend to a family issue.

Initially I was fine. I returned to Houston and to work. I found someone else to mow the lawn. I bought fewer groceries. I watched Grey’s Anatomy.

I tried to call.

“Ash! I got through. Good. I’m okay. We were able to get some food, we’re going to stay home from now on.”

That was my husband. In a pocket of Ethiopia near Modjo in Oromiya. The Ethiopian government was blocking the internet to stifle protests bubbling up across the country.

But it is a big country, about twice the size of Texas. He’d be okay.

My job involves reading a lot of news. It was hard to find. I admit I was probably one of few Americans freaking out over the following story: 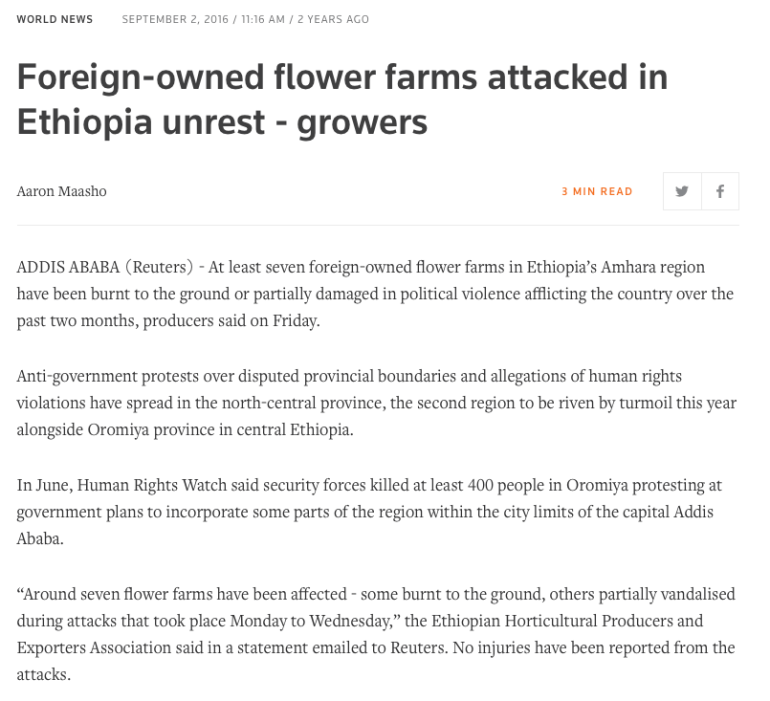 Did I mention that my mother-in-law owns a farm adjacent to a foreign-owned flower farm?

I didn’t have anyone to speak to really. I wasn’t about to tell my parents that Ethiopia was anything other than a beautiful, undiscovered land of greatness, lest they ever “let” me travel there again. I’d invested so much time in sharing the country’s rich history; I quietly quieted down.

I could barely reach my Ethiopian family, although we crisscrossed various messaging apps in search of one that cut through the country’s censorship attempts. We spoke in vague terms knowing we could be overheard –although I wasn’t quite sure what danger I was afraid of, really.

I digress. Coincidentally, I wrote a paper about the (un)constitutionality of the U.S. government to use an Internet kill switch following such tactics by the Egyptian and Tunisian governments during the Arab Spring in 2011. My professor felt the concept was too unrealistic and divorced from actual social media law. (I should point out: He is a divorce attorney, so I should have tailored my paper topic accordingly.)

Truth is, I knew this was happening. I knew the U.S. Embassy had been issuing security alerts, restricting me, and technically, my naturalized U.S. citizen in-laws from traveling outside of Addis Ababa toward the land of our family’s farm.

By August, just as this experience was becoming personal to me, an Ethiopian runner at the Rio 2016 Summer Olympics flashed his arms up in the symbol that would embody the #OromoProtests.

And then on Oct. 2, 2016, on a day that became known as “the stampede,” at least 52 people died in Debrezeit, a town very near my family in Oromiya, following police use of tear gas and (rubber) bullets that resulted in the protesting crowd trampling each other to death.

The protestors continued their efforts, burning neighboring nearby farms, owned by Ethiopian and non-Ethiopian foreign direct investors. Even though our family was not foreign, and even though my husband’s mother is ethnically part Oromo, she was considered an outsider. She is a female property owner in Ethiopia, for one. She grew up in Addis Ababa speaking Amharic and French, and like other Addis city-goers, lacks the ties to her Oromo and Amhara ethic heritages, and cannot speak the local language. She is considered therefore, not Oromo.

Three days after the stampede, protestors raided and burned her farm land, destroying electricity, irrigation, trees, crops, livestock and their home. The land in which we celebrated our wedding had been destroyed.

I was finding a little more news by this point. Ethiopian bloggers were being imprisoned for speaking out against the “democratic” regime. I am a vocal civil libertarian, but with my husband and his family stuck in the middle of the attacks, even I was silenced.

These issued rumbled on for years in varying degrees in quiet complexity.

In February 2018, Ethiopia’s prime minister Hailemariam Desalegn resigned, and in recent months the new prime minister Dr. Abiy Ahmed has ushered in a way of sea-changing reform, including the freeing of blogger activists and thousands of political prisoners.