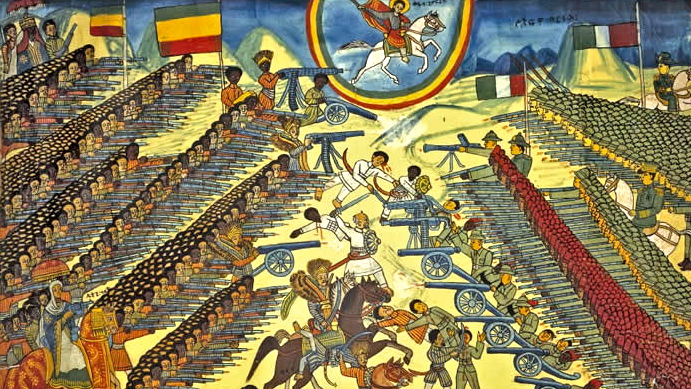 Adowa: Why Ethiopia was never colonized

Ethiopia largely went “off the grid” following the implementation of King Fasilides’ closed-door policy in the 1620s. The country’s policy, along with the advantage of its geography, helped to isolate it from the conquests of European colonialists.

Toward the end of the African scramble, Italy tried to capture what remained. First, an Italian shipping company purchased Ethiopian land near the Red Sea in 1869, and quietly sold it to the Italian government a little more than a decade later. Into the 1880s, Italy continued creeping along the coast, staking its territorial claim.

Ethiopia’s new emperor, Menelik II (taking his name from the first son of King Solomon) wasn’t about to lose any more of his kingdom. He negotiated with Italian diplomats and in 1889 settled on the Treaty of Wuchale, which stated that Italy would:

In exchange, Italy would take possession of the territories along it had already claimed along the Red Sea that would eventually become Eritrea.

Menelik was probably glad he’d negotiated for those extra rifles.

The Battle of Adowa resulted, and its victory is regarded as the source of Ethiopian independece. It is the equivalent to our Battle of Yorktown. It is celebrated as we do on the Fourth of July. And Menelik today is as important to Ethiopian history, as George Washington is to ours.

Teddy Afro, an Ethiopian pop-singer, released this song about the battle last year:

For a bit about women’s role in the Battle of Adowa:

Leave a Reply to Ethiopia during the time of Downton Abbey | Berbere is the new chipotle: Ethiopia Cancel reply